“Shadow’s Moon is an excellent addition to the Kyn Kronicles series. Gray is really coming into her own…I couldn’t put it down once I picked it up. It held my interest from beginning to end.” – Taylor Jones, Black Opal Reviewer

“Shadow’s Moon is riveting. I was caught up in it from the very first word, and I simply could not put it down. I read right through to the end, finishing at 4 in the morning. I can’t wait for the next one in the series. Gray has turned into a first class author of paranormal thrillers.” – Regan Murphy, Black Opal Reviewer 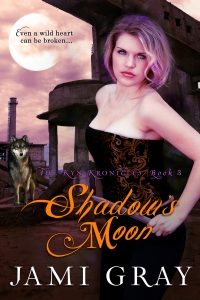 Even a wild heart can be broken…

A blonde, a brunette and a monster walk into a bar and all hell breaks loose.

It should have been the start of a bad joke, but days from a full moon Xander Cade, Tracker for the Northwest Motoki Pack, finds nothing funny about confronting an enraged Shifter in a crowded Portland nightclub filled with unsuspecting humans. The resulting carnage frays an already thin veil of secrecy shielding the supernatural Kyn community from public scrutiny, and ensures she can’t escape the one man she’s been determined to avoid, her Alpha and mate, Warrick Vidis. Dominating, protective and compelling, Warrick threatens her individuality like no other.

As the Northwest Alpha wolf, compromise isn’t in Warrick Vidis’s vocabulary, but when his reluctant mate, Xander Cade, refuses to leave off the hunt for a killer, he has no qualms using whoever or whatever necessary to protect her or his pack. A series of unusual deaths involving lone wolves, along with anonymous threats against him and his Pack, begin to jeopardize his normal steely control. Add in Xander’s continual reluctance to fully accept their Soul bond, and the line between intellect and instinct begins to blur, leaving him wondering if one woman’s love and acceptance will be enough to save both man and wolf.

As the danger escalates, threatening not just their Pack but those closest to them, Warrick and Xander must find a way to trust each other and accept their rare bond or risk losing everything-their pack, their friends and each other.

Silence descended between her and Warrick, stretching until it played along her nerves. Slowly, like a door creaking open, he began to loosen his end of the bond. Her wolf began to settle as it sensed his. He studied her, and she could see both the wolf and man looking back. He reached out, but she stepped out of the way and caught a fleeting sense of hurt and confusion. But she couldn’t allow his touch to weaken her resolve.

“Why are you running scared?” His question was stiff.

“Let me ask you something,” she said. When he gave a short nod, she continued. “Why did you bond us?”

“You were dying.” His voice was gruff, almost angry. “I—we need you.”

Need, not love. His choice of words scraped over her heart. “Need?” she asked around the tightness of her chest.

“If we lost you, the pack would be devastated.”
“What about you, Warrick?” she whispered.

“An alpha can’t have a weakness, Xander,” he said, searing her with the brutal truth.

“So you consider a mate a weakness?” Oh, this was just getting better and better. Why had she thought she could make this relation- ship work?

“Did you forget what happened with Chavez?” he gritted out, rubbing the heel of his hand over his chest.

His movement had her realizing she was projecting her pain through their bond. Furious with herself, and with him, she reeled in her emotions. “Chavez’s mate was crazy.”

“He covered for her because he loved her, and now his pack is in upheaval.”

She wanted to punch him. The urge was so powerful, she had to curl her hands into the leather of her bike’s seat behind her. “So it’s not a mate that you consider a weakness, but the emotion behind it?” she pushed.

“No,” he growled. “You should never give an alpha wolf someone of his own.”

Confusion momentarily overrode her anger. “Why?”

His lips thinned and his jaw tightened. “An alpha is the ultimate protector. Protection of our packs is a natural directive. We will do whatever is needed to protect what is ours. Even if they don’t want to be protected.”

“Even a mate?” She kept her tone careful as she began to get an inkling as to why he was so damned determined to keep his heart out of her reach.

“To protect a mate some would burn the world,” Warrick answered. “Even at the expense of our pack. Chavez is proof of that.”

He snarled and ran a hand through his hair in obvious frustration. “My wolf recognizes you as our mate.” Possessiveness stormed down their bond confirming his words.

Mate. A deep thrill hummed through her at his claim, but her heart ached because there was more to it. Dreading his answer, she asked, “And the man?”

“Is torn.” His face was grim. “Claiming you protects and strengthens the pack, but increases the danger to you.” His and me was left unsaid.

“You think you can claim me, but keep me at arm’s length? As if that will somehow keep me safe?”

He didn’t answer, but she could feel the belief in his screwed up logic. She and her wolf took exception to his assumption, and there was no stifling her growl. “I don’t need you to keep me safe, Warrick. I need you to accept me for who I am.”

Feminine fury rose and burned against his male arrogance. Her challenge was the last straw. She practically heard his control break. Swearing, he trapped her between his body and the bike before she could blink.

Being caged brought her wolf snarling to the forefront. Claws broke through and she swiped out, leaving thin bloody lines across one cheek before he captured her hands in his. He snarled back and took her lips with savage intensity. Ravaging her mouth, he took sharp bites of her lower lip before laving the stings with his tongue. 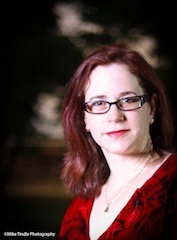 Jami Gray is the award winning, multi-published author of the Urban Fantasy series, The Kyn Kronicles, and the Paranormal Romantic Suspense series, PSY-IV Teams. Her latest release, SHADOW’S MOON was a Golden Claddaugh Finalist, and the first in her newest series, HUNTED BY THE PAST, hits shelves in July 2014. She is surrounded by Star Wars obsessed males and a male lab, who masquerades as a floor rug as she plays with the voices in her head.

Come stalk Jami at any of these fine locations:

While it’s true Michael isn’t technically a pure #Vampire, he’s kind of one. A half breed that’s not just a sexy vamp, but a yummy wolf as well. It’s a two-for-one smexy. 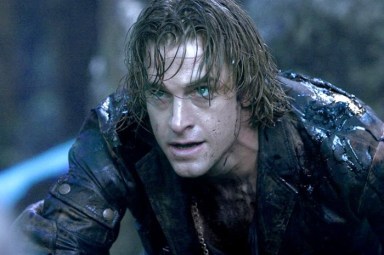 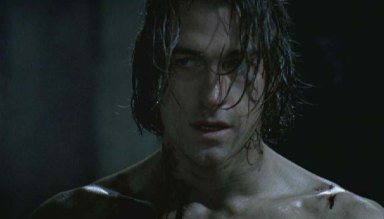 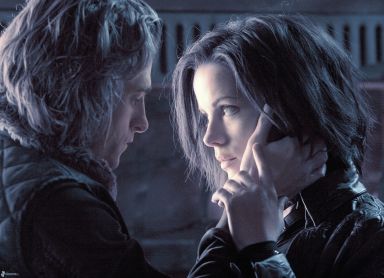 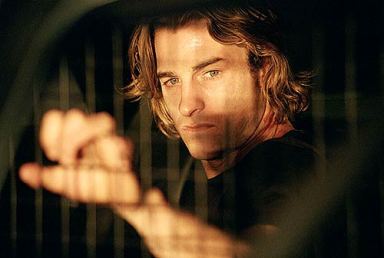 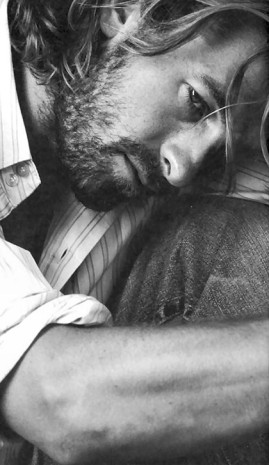 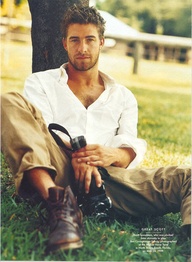 Don’t forget to check out:

Week 7: Aiden (Being Human US) 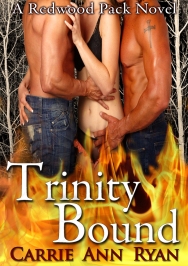 Hannah Lewis, a rare earth witch, is taken from the only life she’s ever known. Held at her will by a sadistic wolf, she almost gives up hope that she’d ever see her real life again. But as her fellow captive, a werewolf named Reed, tries to calm her fears, she begins to feel a spark of something she never thought she’d feel – love. But is Reed, alone, enough to get her out of this dark basement so she can move on with her life?

Reed Jamenson, the artist of a werewolf Pack of Alpha males, knows instinctually that Hannah is his mate. Thus, despite their imprisonment, he will do all to protect her and then worry about their hearts. But is he strong enough to find a way for both of them to escape? And why does he feel as though something else is missing?

Josh Kolb, an ex-military human, stumbles upon Reed and Hannah and finds he must trust this new world of supernatural beings to survive. But that desire will lead the three to a triangle of attraction that will test the boundaries they all possess and its consequences in defeating the enemy. Can they all trust one another to save themselves and life as they know it? Even at the cost of their own hearts?

Sound good? Check it out.

And for a taste of Yum~

Hannah put her hand on Josh’s arm, a jolt of electricity flashing between the two. She gasped and he held back the urge to do the same. She gave him a smile and he desperately wanted to brush the curls from her face, soothing the bruises that couldn’t hide her radiant beauty. Reed crouched behind her, still protective. He too was beautiful, his chiseled cheekbones pronounced against the shadowed, healing bruises.

Crap. He could understand thinking sexy thoughts about Hannah, but since when did he think males were attractive in anyway? Either that weird connection confused him, or he really was falling for Reed. He didn’t know which one, if either, he wanted to be true.

Reed bent over Hannah to whisper to them both. “Camera.”

“Don’t worry about them now. We have about ten more minutes and then we’d have to worry.”

They both looked curious with a similar tilt of their heads, but didn’t say anything, merely nodding.

“Who are you?” Reed whispered, leaning closer.

“Josh.” Why the hell did he say his name? He was never a name, just a presence, on any other mission. Why did he want them to know his name? Know him? “I’m no one. Just a friend.”

Carrie Ann Ryan is a bestselling paranormal and contemporary romance author. After spending too much time behind a lab bench, she decided to dive into the romance world and find her werewolf mate – even if its just in her books. Happy endings are always near – even if you have to get over the challenges of falling in love first.

Her first book, An Alpha’s Path, is the first in her Redwood Pack series. She’s also an avid reader and lover of romance and fiction novels. She loves meeting new authors and new worlds. Any recommendations you have are appreciated. Carrie Ann lives in New England with her husband and two kittens.

Carrie Ann loves hearing from readers. You can find her at:

A Taste for a Mate