Heart of a Vampire Series (PRN)

The world of Vampires can be a dark one, but even the monsters of the night can be lonely and need love. Join them on their journeys if you dare…

When duty forces a shaman to stop a vampire from her revenge, love doesn’t just burn… it bites.

For two hundred years, Niki DeVeraux has hunted the monster who murdered her family, and made her a vampire. She finally catches up to her sire, only to face more than she bargained for. Local vampire clans don’t care for rogues. And the local sheriff, too sexy for his own good, seems to want nothing more than to get in her way. Worse, he stirs something in Niki she’s ignored since her turning, and forces her to remember she’s not just a warrior, but a woman.

Bound by his duties both as local Keeper of the Peace, and sheriff, Shane Spencer must protect humanity, while preventing the recent conflicts between the werewolves and vampires from becoming an all out blood war. When wolves start turning up dead, tensions between the pack and vampire clan grow. Suspicions fall to the only rogue in town, Niki. Yet, Shane knows she’s not to blame. And it has nothing to do with the hot, primal emotions she stirs within him.

Shane and Niki must work together to stop the bloodshed. Trouble is, the desires raging between them might prove more dangerous than the surrounding threats.

“If you like kick ass females, and magical males, then you will definately enjoy this” ~The Book Diaries

“Kallyn does a great job of building suspense and undeniable attraction and leaves you dying to know what’s next for these characters.” ~ParaYourNormal

“This book was jam packed with action and sexual tension.” ~Bibliophile 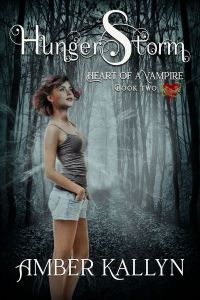 After centuries alone, can a vampire king trust the woman who’s woken his heart?

Jordan MacDougal, laird and vampire King, walks a thin line of civility between protecting his clan, and handling the conflict from the local shifter pack. When some of his people disappear, and the wolves accuse his newest, intriguing vampire of being evil, Jordan discovers that the traitor in his midst may be closer than he dared believe.

A newly turned vampire, Dalia Jensen wakes to an unusual and frightening new world, with no memory of the past year of her life.  Accused of working with the Master Vampire who held her prisoner, her inability to remember the truth leaves her reeling under allegations of vicious past actions. Uncertain of her culpability, she’s unable to trust her own instincts as the reigning Vampire King turns her world upside down.

When the wolves call for her trial, demanding her life for those killed and tortured, Jordan and Dalia must work together to find the truth, and save the love blooming between them.

“The author continues the action packed story from Bloodstorm. There is love, doubt, betrayal and action in the 2nd book of the Heart of a Vampire series.” ~Rhonda D

“If you want to dive into a story that will suck you in, open this book and take a bite.” ~Shannon J

“These vampires are so HOT, and their lives are so intertwined with the need for a mate and family, that you can’t help but feel everything with them.” ~LyssaReviews 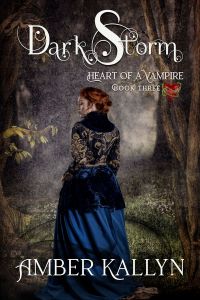 After a millennia apart, can two vampires rekindle their love, or will the line between right and wrong keep them apart?

Hunted by the demon who imprisoned her for hundreds of years, Ashlyn MacDougal is fleeing with a secret which could destroy her soul. When she runs into her lost love, Connor Gregory, life twists upside down.

Connor has spent the last thousand years as a Judge for the Magic Council, tracking and destroying demons. Especially the abominations—those part demon, part vampire. When he discovers his long lost lover is not only alive, but protecting a half-breed, his confusion knows no bounds.

Thrown together by circumstance, they must resolve their past. With demons after them, Ashlyn and Connor come to find their love still burns. Yet, the secrets she hides, and his duty to his job, might just keep them apart for another eternity.

“This is the third book in the Heart of a Vampire series and they just keep getting better.” ~ Tala

When a mortal cop must delve into the paranormal, only a Viking vampire can save her soul, and her heart.

Detective Celeste Wilder knows who she is, a damn fine cop. But when the recently dubbed ‘Cult Murders’ start back up, this time targeting city prostitutes she’s sworn to protect, she’s thrown into a world of paranormal creatures she never believed existed. And now, they’re out to keep her from uncovering even more secrets.

An immortal Viking vampire, Brandon Wulfgar knows something is strange the moment he sees Celeste valiantly fighting for her life against a group of rogue vampires. When he’s asked to work with her–solve the crime while keeping the mortal woman safe–he figures no problem.

But as the undeniable connection between them grows and danger appears from every side, they will have to trust one another not just for their lives, but for their very souls.

“I started out reading the first in the series only however I got so hooked on
the suspense and romance I ended up reading the whole series. I’ve never read
Amber Kallyn before but now I’m a forever fan.” ~ Linda Lang

“These books are awesome. I found them hard to put down and immediately purchased
the next in the series…forgoing studying for my midterms. SO Bad..but Soooo
Worth IT!” ~Chanelle Reynolds

A Viking vampire must face his tortuous past to save the woman who holds the key to his future.

Eric Wulfgar escapes from twisted dreams, only to find they have followed him into reality. Feeling like a shell of the man he once was, his king’s orders to help a New Orleans vampire clan might require more than he can give. But he has no choice to leave the shadows and return to the living.

Cat Bienville is frantic. Something strange is stalking the vampires of New Orleans. When the missing turn up dead with no explanation and her sire goes missing, she runs out of options. Left in charge of her coven, her duty is to keep her people safe. Only, she’s not prepared for help to come in the form of a chauvinistic male with a tattered soul.

When friends may be foes, Cat and Eric must find balance with one another in order to unveil the evil in their midst, even as a bigger threat darkens the horizon. Yet, Cat’s past may fracture their growing love. For how can she give Eric her heart, when her deepest secret may be more than he can ever accept?

A vampire demon half-breed must save the only woman able to mend his soul.

Half-demon, half-vampire, Sean MacDougal is an outcast, unwelcome by all. When the Arcaine world finds out a war is brewing that will affect all paranormal creatures, Sean is the only one who can find the demoness who holds desperately needed answers.

Used for centuries as the pet Seer of the demon who destroyed her family, Mayah is rescued by a strange half-breed who asks, rather than demands, her assistance. Unable to trust, she pretends to agree, but only if he helps rescue her brother, held prisoner deep in the frozen wilds of Alaska.

Becoming a protector fulfills an emptiness within Sean he never knew existed. Being protected makes Mayah feel safe for the first time in centuries. Hunted by an entire demon army, led by the one who wants Mayah back, they must learn to trust in themselves, in one another and in the emotions sparking between them–no matter how hard they try to resist.

After centuries alone, can two vampires accept that sometimes love is worth the risk?

As a Judge, Anca Fieraru’s duty is to eliminate problems for the Magic Council. Her current assignment–find those responsible for the recent slaughters in Moss Creek, Arizona. To track a local vampire traitor and continue the hunt for the supernatural killers she must utilize the one thing guaranteed to give her a necessary edge–her Romani magic. Unfortunately her use of magic and lethal judgment sets her at odds with her new partner, a sexy, stubborn clan vampire. Their fiery clashes remind Anca there’s more to life than holding others at a cold distance.

Doctor Matt Dixon has spent centuries healing others in atonement for his own heinous crimes. Never mind they were committed while fighting the Arcaine monsters that lurk in the dark. After killing those responsible for destroying everything he ever loved, he’s finally found a place of peace in the Moss Creek clan. Until death once more found its way into his life. Ordered to work with the Magic Council’s deadly assassin, he soon realizes there’s an intriguing woman beneath Anca’s icy façade.

After spending centuries unable to trust, both vampires gave up hope long ago. But when Matt and Anca are together, whispers of love intertwine with fate. They must overcome the horrors of the past and learn to trust one another, before the present danger consumes them and all they care for.

She’s running scared, afraid to open her heart. He won’t give up until he proves to her that love can heal.

As an empath, Shana Wilder keeps most people at a distance. Last year, when she learned the paranormal actually exists, she lost friends, and nearly her own life. Now, more vampires and other creatures are wreaking havoc on Phoenix’s city streets. More of Shana’s friends are dying. And the only person she can turn to is a man who makes her yearn for things she long ago decided could never be for her.

Sebastian Lucerne never wanted to be a vampire Master, with all the headaches that come with the job. But when Phoenix needed to band together, to stop evil’s spread, he took control. Unfortunately, dark magics are spreading through his city, once again. Nor can he deny that one of his top concerns remains the stubborn, sexy, and far too distant Shana, who refuses to let him further into her heart.

Sebastian swears to keep her safe, along with the rest of his city. He’ll stamp out the murderous Rogues, and then, will somehow find a way to reach Shana. Assuming their enemies don’t take them down first.

Buy the bundles and save 🙂