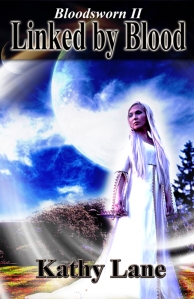 A hottie hero and an empath. What’s better than that?

Available at The Wild Rose Press

The moment the lethal Blade, Bracca Cu-Laurian sees empath, Sheren Ni-Annun, he fights his desire for the young widowed mother. Not only is his life pledged to his Bloodsworn, but his past sins make him an unfit mate for any woman, let alone an empath. For him, the line between duty and desire will forever be one he can never cross. Sheren’s late husband taught her to resent a Blade’s duty, and she has since vowed to avoid those fierce warriors. Then Bracca awakens her empathic senses with a single touch, challenging both her vow and his resolve with the depth of their mutual desire. When her young son is linked to Bracca’s Bloodsworn, the dire consequences that threaten to destroy them and those they hold dear, may also be the very thing that brings them together.

Breathing hard, Sheren ran through the exercise to put her normal shield back into place, concentrating on making it stronger, denser. It appeared to be working until she became distracted by a new emotion winding sinuously over and around the half-formed shield. Desire.

Potent, all consuming, and definitely not hers.

She snapped her eyes open and caught the longing in Bracca’s eyes an instant before he blinked it away.

“You want me,” she whispered, aware her voice trembled with wondrous discovery.

“Forgive me,” he said, averting his eyes and pulling away from her. Even without his touch his guilt assailed her, the emotion strong, but not enough to overpower that yearning desire.

“I never meant to frighten you. I only sought to keep you from injuring yourself. I’ll leave—”

She grabbed his retreating hand. Not even with Sayjan had she felt such breathtaking desire. Sayjan had loved her. But her senses had not blossomed under her late husband’s touch. Not like this. Compared to what she sensed now, she’d been blind before.

With her shield half up and only Bracca close enough to sense, she found the invading emotions easily bearable. More than bearable. Intoxicating.

“Bracca…” She reached up to touch his face. He stilled instantly. Pressing her hand firmly to his cheek, she said, “I feel you.”

He swallowed hard. “How can you even bear to touch me?”

She didn’t understand his question. Not bear to touch him because he was a Blade? Or because she’d swore never to get involved with a Blade again? How could he know? Not even Karess knew of her vow. At the moment, she had trouble even remembering why she’d made it.

Slowly he raised his hand and traced the edge of her face with calloused fingers. Wonder and longing swirled through the desire with a poignant sweetness that brought tears to her eyes.

“You are so beautiful,” he whispered. Head bending, he leaned closer.

Sheren knew she should stop him. Had to stop him. Yet the emotions pouring into her were like a heady draught of wine. She could no more stop drinking them in than she could stop breathing air. Merciful Luma, she wanted this.

The first touch of his lips went through her body like lightning. Her knees buckled. He caught her, one arm across her lower back, the other between her shoulders, his large hand cradling her head.

Sheren gazed up at him, clutching at his shoulders. Slowly, his gaze locked with hers, he lowered his head again, giving her every chance to turn away. She didn’t.

His lips were firm and warm. Insistent. His tongue stroked firmly against her closed mouth, demanding she let him in. She surrendered with a moan. He kissed like a warrior, invading, conquering. Sweet pleasure laced with the bitterness of desperation crashed over her. His? Hers? She could no longer separate her own emotions from those she felt coming from Bracca. Nothing in her life had ever prepared her for this…fusion.

Their bodies shifted closer. He deepened the kiss. Her hands slipped up his strong arms, fingers sliding beneath the edges of his sleeveless tunic. The hard muscles of his shoulders shifted and bunched beneath her touch. So strong, so hot…

Available at The Wild Rose Press