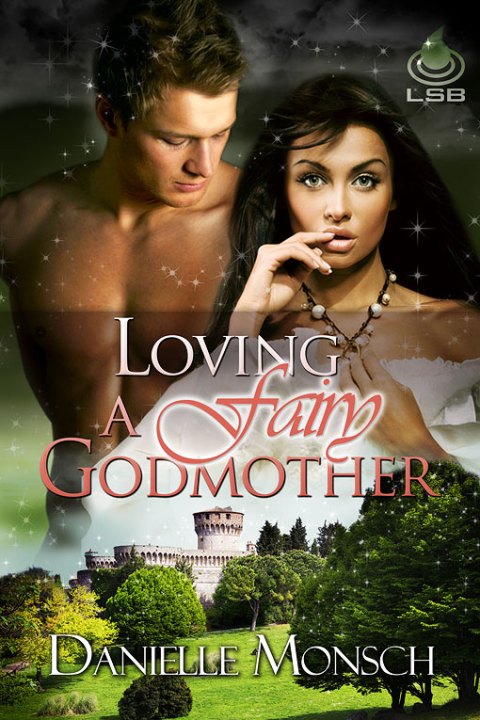 She graciously agreed to one of my interviews, the brave woman. Plus, we get a sneak peak of her newest release, Loving a Fairy Godmother.

What hobby do you enjoy when not writing?

I’m an otaku, which is another way of saying I’m a very geeky person very into Japanese cartoons, comic books, movies and music.  If I’m not writing and have time away from the family, I’m delving into this world.  Miyazaki is god and one day, I really will learn to speak Japanese.

What would you do with $1 million dollars (tax-free, of course)?

I’m very boring and practical I’m afraid.  House would get paid off, kids college funds would be fully funded, large chunks would go into retirement investments.  The only slightly impractical use would be a yearly vacation.  Hubby and I both enjoy travelling, and that kind of money would fund several first-class travel adventures.

If you could be any supernatural creature, what would it be and why?

My first love was vampires when I was younger, and while I may not have the all-consuming obsession I used to have with them, vampires would still be my answer today.  Even the negatives wouldn’t be that bad for me.  Anyone who has seen my paleness in pictures can tell I don’t do much time in the sun.

What is your favorite book? Why?

I won’t say favorite, but the book that has had the most lasting impact on me would be ‘Little Women’ by Louisa May Alcott.  Partly this is due to the timing of me reading it, that area just on the cusp of pubescence where lots of things are getting churned up in the brain, but that book has had a lasting impact on my psyche.  I’m sure I’m not the only girl that feels that way though.  Just mention Beth dying in a group of women, see how many start tearing up.

Pumpkin pie.  My mom makes the world’s most delicious pumpkin pie, it’s a lot spicier (nutmeg spicy, not curry spicy) than the store bought stuff, and she has a real gift for making flaky crust.  She only ever made pie for Thanksgiving and Christmas though, never any other time of the year, no matter how much we begged.  As soon as Halloween hit, my siblings and I would start counting down the days until it was time for pie.

If you could time-travel, where would you go and why?

I’m really not a time traveller.  I like indoor plumbing, pain medicine, and air conditioning too much to ever give them up.  It’s not that I don’t enjoy learning about history, but actually going back to experience the stink?  Blech!

Why are manhole covers round?

Asking questions like this, have you ever thought of starting up your own cult?  I guarantee more money than in writing.

And the Fast Five:

Chocolate – was there ever a doubt?

Mountains.  Hubby is a beach person.  Somehow we remain married

Naturally late night, but as a mom I’m forced to be early morning

Can I answer chocolate?

Yes dear, you certainly can 🙂

Tiernan is one of a kind. Beyond the divine dimples, killer blue eyes, and hard muscled body, Tiernan is also the only Fairy Godfather. Most of the Fairy Godmothers have no problem with keeping Tiernan around, but Reina isn’t like most Fairy Godmothers.

Amongst Fairy Godmothers, Reina is the best. Organized, efficient, logical. So why is it when Tiernan is around, all those qualities fly out the window? Reina doesn’t like that one infuriating male makes her lose control, and just wants him gone. Circumstances arise that just might let her get her wish, though not in a way she ever wanted.

Tiernan is given an assignment and told either get a Happily Ever After or he will no longer be a Fairy Godfather. Reina is going with him to supervise, but if Tiernan gets his way, he’ll not only be supervising that luscious stubborn fairy in bed, but also get her to admit Happily Ever Afters also apply to Fairy Godmothers.

“You can just call me Tiernan,” he interrupted.

“Didn’t Sara just tell you that you had to follow my directions?”

That pushed her over the edge. “Do you truly think you are going to secure a HEA when you haven’t been able to do it yet?”

He let out a derisive snort, but immediately realized that was a huge mistake. Her face lost her usual look of annoyance crossed with bemused tolerance, leaving pure ice in its place. “This is why men should not be allowed into the Godmother program. None of you have any respect for Happily Ever Afters.”

“I never said I didn’t believe in HEAs” he began, but she cut him off.

“Every case you’ve been on tells me you don’t believe, or else you would have tried once, just once, to get one!”

His hands slammed on the table as he leaned across it, his face coming inches from hers. “I’ve never tried because I believe in love! Humans need love so much, who the hell was I to screw up two people in love to get them to HEA status? I could never forgive myself if two people in love missed out on each other because of my actions!”

All anger fled her face, and a hesitant, unsure look came over features. “What do you think a HEA is?”

He drew in a deep breath, sitting down once again. “I think happily ever after is a nice way to end a story, but in the world I remember, it’s a waste.”

Her hand was halfway towards him before she seemed to remember their roles, and she pulled it back to her side. “Love is wonderful, but only love alone is incomplete. You can love someone, but they can ultimately not be right for you. Even in love, people can still be led to believe the worst of each other, still hurt each other, still decide they are better without the other,” she began, her words hesitant, as if she was trying to define to herself what it all meant as much as to him. “But the Happily Ever After is so much more. It’s finding your perfect match, love purified, refined, to such an extent that it can never be sundered. With a Happily Ever After, men can achieve greatness, as can all the generations who follow growing up in its shadow.”

“And you think jeopardizing the surety of a love match now is worth it for only the possibility of a Happily Ever After?” he asked, his voice gentle, reverent, wanting nothing to break this intimacy their words were creating.

“I do. In your view, maybe that seems cruel, but in my view, there is no greater tragedy then two people who almost make this connection but fall short in the end.”

Such a hard exterior to cover such a tender heart. “I’m not sure if I can believe as you do,” he said after considering her words. “But I never want Sara… you… to feel as if I let you down. After we get this situation behind us, I want you proud of the job I do.”

And as his breath caught at the rare smile she bestowed upon him just then, he knew all she had to do was keep smiling at him like that, and anything she wanted, whether it be his beliefs or his blood, he would give her.

Her smile faded, and the moment ended. Reina cloaked herself in her position of authority as she handed him the file that had been sitting on her desk. It was already open to show a picture of a blond girl, pretty and vibrant with a mouth full of straight white teeth, all of which was evident even underneath the dirt. “I looked over this case earlier, before I realized what was going on,” she said. “It is a good, solid HEA case. There are several challenges to overcome, but also several sources of help for the client. It is about as perfect as a case can be for this purpose, as evenly balanced as I’ve ever seen. No one can accuse the council of favoring either side. The girl’s name is Cinderella. She lives with an abusive Stepmother and two rotten spoiled stepsisters. She is a very kind, generous girl—though a little too much of a doormat, if you ask me—but outside of that, not really any other character flaws. She is much beloved in her village, children and small animals flock to her daily. In short, we exist to give HEAs to mortals like her.”

Tiernan read the file quickly, then flipped the page and took in the photo of the male who would supply the HEA. “A prince, huh? That’s pretty standard.”

“Indeed, but for the most part, we don’t mess with the classics here.” The pointed look she gave him told him he was one of the exceptions, and she wasn’t necessarily thrilled about it. Ah yes, completely back to normal.

He returned that look with a flirty smile. “I used to serve royalty, Godmother Reina. Believe me when I say, sometimes the large crown is to compensate for something.”

“Oh really? Well, I assume we can say the same thing about your sword, eh, knight?”

Maybe not completely back to normal after all. The second those words passed her lips her eyes went saucer wide, and Tiernan couldn’t say who was more shocked, him or Reina herself. There was no way he was letting this pass. His voice coming out a low growl, he replied, “Why, Reina, I never knew you were interested in the size of my sword. Anytime you want a private viewing, I will be more than happy to oblige.” 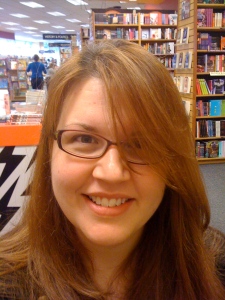 Danielle Monsch is a Romantic Geek Girl Writing in a Fantasy World.  Born to the pothole laden streets of Pittsburgh Pa, she now resides in the Pacific Northwest, where they tell her that the sun will eventually be seen, but she really doesn’t believe them.  She has two beautiful kids who do everything in their power to make sure she doesn’t make her daily word count, and a hubby who is her greatest cheerleader as well as her tech support.

And last, but not least, where can we find you on the internet:

www.plotmamas.com – group blog I’m part of on the joy and strain of mixing motherhood and writing